Posted on January 25, 2019 by upstatedowntown

The temperature outside the annual Union des Grands Crus de Bordeaux (UGCB) tasting held at Cipriani 42nd Street in Manhattan on 21 January was in single digits, but the reception by the industry throng inside the cavernous space for Bordeaux’s 2016 vintage was warm, bordering on chaud.

Many Bordelaise vintners have called 2016 a “miracle vintage”, one that started out as a rainy washout in the first half, but then finished almost completely dry and sunny throughout July, August and September (save for a much-needed rain storm on 13 September), with warm (not hot) days and cool nights. The overall result, especially for the reds: elegant, phenolically ripe wines brimming with gorgeous red-ish fruit, silky tannins, great energy and freshness. While these wines will age well in the cellar, they offer pleasure in relative youth as well, the best of both worlds. And based on the sterling quality of the Grand Crus, 2016 should be an excellent vintage for less expensive, ready-to-drink appellations in Bordeaux (e.g. AOC Bordeaux, Cotes de Bordeaux, etc.) in the $12-$20 range.  END_OF_DOCUMENT_TOKEN_TO_BE_REPLACED

Posted on November 28, 2018 by upstatedowntown

During its long history, especially during the Age of Discovery, Portugal has been known as a nation of explorers, something that allowed the (then) small kingdom to punch far above its weight for centuries as a colonial power.

Times have changed, and the tables have turned, as Portugal itself, sans colonies and King, has become a hot tourist destination and a country to explore, not least for its vibrant and rapidly evolving wine sector, a big success story of the last few decades, but one the US market should know more about.

This was the point of departure for the Wine Media Guild’s (WMG) most recent tasting/lunch — “Exploring the Wines of Portugal” — hosted by WMG Member David Ransom, and featuring Ivan Escalante, a sales rep for Iberian wines for the distributor Wine in Motion USA, at the Restaurant at La Nacional (The Spanish Benevolent Society).

Posted on November 16, 2018 by upstatedowntown

November 2-11, 2018, was Cider Week in New York City, a festival of multiple cider events and tastings in bars and venues across the Big Apple, organized by the New York Cider Association. The aim: “to cultivate appreciation of New York’s  orchard-based cider” by showcasing its exceptional quality, diversity and food-friendliness.

If the Lower East Cider Fest (on November 8) in Manhattan was any indication, a major Cider Week tasting of over 30 (mainly) New York State cideries that took place in the historic Essex Street Market, then it was truly mission accomplished.

It was a crowded, youthful scene in the Essex Market, one that should give the craft (hard) cider segment of the industry much optimism. As it is, craft cider continues to grow at a buoyant 35% clip annually, one of the hottest US beverage categories.

END_OF_DOCUMENT_TOKEN_TO_BE_REPLACED

Posted on October 25, 2018 by upstatedowntown

It’s cider season in the Hudson Valley, and I have lately been gathering the materials – and fruit – to make my own (now) annual production. This process has taken me several times to Half Time Beverage in Poughkeepsie which, in addition to being a craft beer and cider store par excellence, is also a good spot for home brewing supplies.

While purchasing some essential items like pectic enzyme and yeasts for my upcoming cider batches, I wandered over to Half Time’s craft cider selection, and was drawn immediately to one of my favorite producers anywhere — Foggy Ridge, from the Blue Ridge Mountains of Virginia.

I first tasted some of Foggy Ridge’s (FR) ciders three years ago at a special cider tasting of the Wine Media Guild, and I was greatly impressed. In particular, I remembered that FR’s “Serious Cider” was my favorite, and I spotted it on Half Time’s shelf. 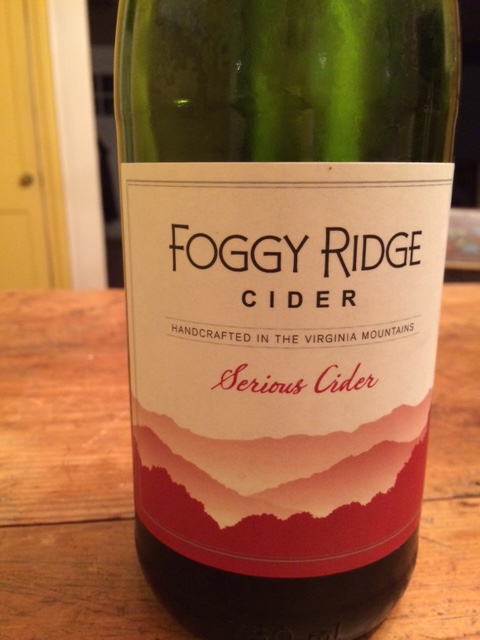 END_OF_DOCUMENT_TOKEN_TO_BE_REPLACED

Posted on September 11, 2018 by upstatedowntown

One year ago, Benmarl Winery shared the coveted Winery of the Year award (with Tousey Winery) at the 2017 Hudson Valley Wine & Spirits Competition (HVWSC).

At the 2018 HV competition, held this past Saturday in Rhinebeck, NY, part of the weekend-long 2018 Hudson Valley Wine & Food Fest, Benmarl’s stellar wines made sure there was no “co-” in the Winery of the Year award this year. And it’s easy to see why: not only did Benmarl win Best in Show for its stunningly good, Champagne-like 2012 Blanc de Blancs sparkling wine (which also took Best Sparkling), but it also took Best Overall Hudson Valley Wine (made with Hudson Valley fruit) for its unctuous 2017 “Sweet Sarah” dessert wine (75% Vidal, 25% Traminette), which was also Best Dessert Wine. Add to the list a Double Gold for its 2016 Proprietor’s Reserve Red (vinifera) blend, and its Gold medal-winning 2017 Seyval Blanc (from my panel), and you have a richly deserved result for Benmarl. Impressive.

Still, it was far from a one winery show. END_OF_DOCUMENT_TOKEN_TO_BE_REPLACED

Posted on August 16, 2018 by upstatedowntown

There were three categories for cider at the Classic this year: Best Modern Cider, Best Specialty Cider and Best Heritage Cider. END_OF_DOCUMENT_TOKEN_TO_BE_REPLACED

For well over a decade, there has been a growing consensus among winemakers in the Hudson Valley (HV) that Cabernet Franc is the best red vinifera grape variety for the region. As an observer of the local wine scene, I reside firmly in this Cab Franc camp.

Likely a native of southwest France, and the primary red grape in France’s Loire Valley, Cabernet Franc is a parent (along with Sauvignon Blanc) of the more famous Cabernet Sauvignon. It is lighter in body and color than its offspring, and it both buds and ripens earlier than Cabernet Sauvignon, too.

Not only does Cab Franc grow well in the HV’s highly variable climate, but it’s also one of the most winter-hardy red vinifera varieties, able to withstand (normally) vine-killing temperatures of -10 F  — a common occurrence in the HV’s often frigid winters. Another important factor is its versatility in the cellar, owing to its relatively lean tannins, medium body, and multi-layered fruit profile – berries, cherries, plums and cranberries – and excellence as a blender. Think cool-climate Cab Franc reds, like Chinon from France’s Loire Valley, with the possibility for bigger, more complex Cab Francs in stellar vintages. Over the last decade, a Cab Franc-based wine has garnered the Best Red accolade seven times at the annual Hudson Valley Wine & Spirits Competition.

Normally, the Wine Media Guild of New York’s annual Bordeaux lunch takes place in January, when the Union de Grand Crus de Bordeaux’s (UGCB) show comes through town as part of a national tour. But January’s unpredictable weather — and the harried schedules of producers during the UGCB campaign — led to a postponement from January 2018 to this past Tuesday, a beautiful, sunny day in May in Manhattan.

It was worth the wait.

With thanks to WMG co-chairs Pat Savoie and Charles Scicolone for organizing, our exceptional Grand Cru “ensemble” was composed of  Château Beychevelle (Saint-Julien), Château Guiraud (Sauternes), Château Latour Martillac (Pessac-Léognan) and Château Kirwan (Margaux). Each house brought a range of wines from outstanding vintages (from 1998/2000, to 2015)  for the walk-around, and some older vintages showed up at the lunch, all of which took place at Il Gattopardo.

This focused, manageable tasting/lunch illustrated top-flight Bordeaux’s enduring value: a benchmark for age worthy wines of complexity and finesse, stimulating both to the palate and the intellect, and versatile at the table. 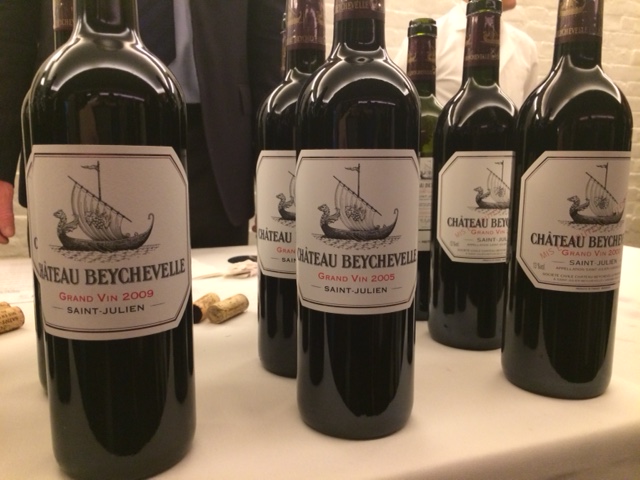 END_OF_DOCUMENT_TOKEN_TO_BE_REPLACED

Posted on January 28, 2018 by upstatedowntown

That was indeed my impression from the annual Union des Grands Crus de Bordeaux (UGCB) tasting recently held at Cipriani 42nd Street in Manhattan, where the newly released 2015 vintage was on full display.

Touted as great (or near great) by many in the industry (media included), the 2015 vintage – at least from the large sample provided by the UGCB – lives up to the hype: in the main, these Grand Cru wines are aromatic and elegant, with depth and structure, charming fruit, supple tannins…and aging potential.

Without a blizzard to thin the crowd this year (see post on previous UGCB tastings), the  event was a packed affair, with the attendees buzzing with the vibe of an exciting vintage. Just trying to make it to a spit bucket was often a contact sport! 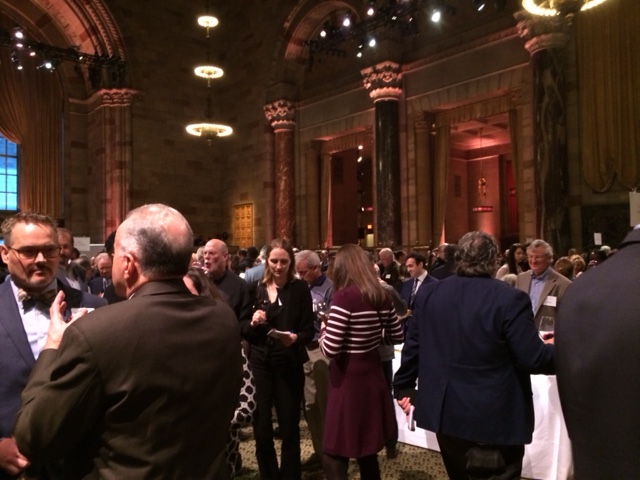 END_OF_DOCUMENT_TOKEN_TO_BE_REPLACED

Posted on December 10, 2017 by upstatedowntown

After years of work conflicts and scheduling bad luck, I finally made it to one of Ed McCarthy’s annual December Champagne tastings for the Wine Media Guild of New York (WMG)!

And after whiffing so many times on this yearly event, things actually worked out in my favor, given Ed’s choice of theme this year: Rosé Champagnes, with a record number of Champagnes to sample (22 in all).