Apples have long been a touchstone here at Upstate-Downtown, whether via our farmhouse, where we “inherited” three productive Empire apple trees — a great window into the growing season — or in the Hudson Valley more broadly, through its apple-growing traditions and excellence. Part of that tradition, now experiencing a local revival, is hard cider, a topic I have covered.

This past fall, despite an always crazy autumn work schedule — and because of an amazing 2015 apple harvest — I finally succeeded in making some hard cider with (mostly) our own apples, realizing a long-held intention (Michael Pollan, one of my heroes, would be proud!). And after years of writing about fermented beverages — wine, beer, spirits and yes, cider — I produced something not only that was drinkable the first time out, but a blue-ribbon winner to boot!

Winning a ribbon was not on my mind when I set out to make my first cider batch. My primary motivation was to honor the epic vintage of 2015 for apples in the Hudson Valley. While we had experienced good harvests before, 2015 was not only copious in quantity, but also of amazing quality, with scarcely a blemish in sight, the result of a benign spring (with no untimely frosts), and a mostly dry, temperate summer. Mouth-watering and perfectly balanced between tart and sweet, our Empire apples got raves from everyone who sampled them, providing ample inspiration to get busy with some cider.

I’m hands-on organic with the apple trees: no sprays or chemicals are applied, but I do prune the trees in late winter; severely thin the fruit after fruit-set in May; and cull any diseased or damaged fruit throughout the growing season. Fortunately, our Empire trees are pretty tough, disease resistant and relatively low-maintenance.

A Cornell University cross of a McIntosh and a Red Delicious, first released commercially in 1966, the Empire is an improvement on both parents, sporting the aromatics and sweet/tartness of the McIntosh, along with the firmness, crunch and good storage quality of the Red Delicious. With lively acidity and a vinous flavor, it is an excellent all-around apple, good for eating, baking, juicing and, yes, as a base for cider.

While the object of the cider was to use our own apples, I knew from my own research that most ciders, particularly the stellar examples from England, France and Spain, are blends, aiming for a balance between sweets, bitters and sharps (along with some tannin for backbone). This in mind, I resolved to find an antique cider apple to include with the Empires, adding some grip and structure to mix. In late September, on a visit to the Montgomery Place Orchard farm stand (which features over 60 apple varieties, many of them “antiques”),  I consulted with the owner, Talea Finck, who pointed immediately to the Golden Russet.

A compact, dense and greenish-gold apple with russeted skin (similar to a potato), the Golden Russet was discovered (apparently) in New Jersey in the late 1700s, and is an ideal cider apple, both high in sugar and acidity, along with a citrusy character and nice tannin from the rough skin. I was quickly sold: the Golden Russet would be the “seasoning” for the majority Empire blend. My goal: a clean, crisp and aromatic (dry-ish) cider, that would be highly sessionable.

A fortuitous development happened during the harvest period: a home-brewing supply store, Barley, Hops and Grapes, opened in the nearby village of Red Hook. With all the equipment I would ever need now easily at hand, I had no more excuses not to brew! And another residual benefit from this: shop owner Tom Folster is an invaluable home-brewer’s resource and sounding board for the many questions that arise during the fermentation and production process. He patiently answered my many questions, and steered me into some good directions, not least the use of a liquid English cider yeast for my fermentation!

Before pitching the yeast, however, one has to have the juice (a.k.a. the must). And not having an apple grinder and press at my disposal (hopefully Tom will have some on sale before next harvest!), I relied on a Hamilton Beach “Big Mouth” juicer to extract the precious liquid.

It was a chore. While relatively efficient in extracting the must, the “Big Mouth” soon gums up from the apple detritus left behind, requiring repeated clean-outs of the entire machine. For 3 gallons of liquid, it took five hours of constant toil, and over 40 pounds of apples ( a 4 to 1 Empire to Golden Russet ratio). Once the required quantity was achieved, I added some pectic enzyme to the brew — a key step to preserve the apple aromas and to help clarify the must — and then pitched the English cider yeast, without using sulfites to kill off the native yeasts. I went for peaceful yeast coexistence, hoping the cider yeast would dominate the ambient ones. This was indeed the case, as the liquid in the glass demi-john was soon fermenting like mad in our cool (68 F) basement location. On went the airlock! 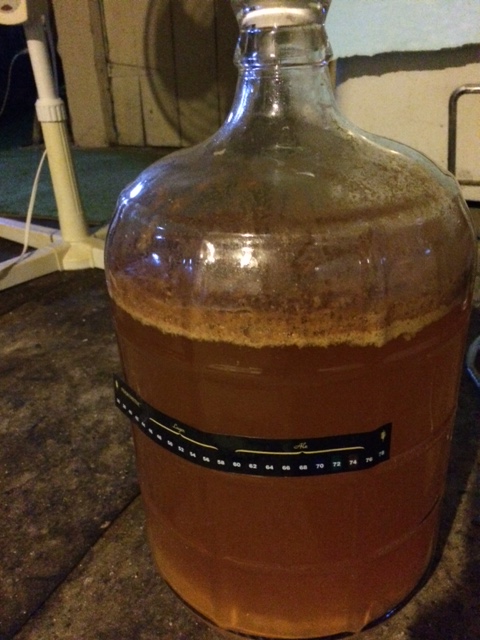 I’ll spare you the fine points of racking, secondary fermentation, carbonation (which I did not undertake), bottling, etc. — there is plenty of literature on all of that. Just two points here. First, you have to keep things clean and sanitized throughout the entire cider-making process, and Star San, a highly concentrated, acid-based sanitizer, is the ticket. Easy to use, safe and effective, and leaving no residue, it’s a homebrewer’s best friend. Second, an auto-siphon is the best $10 investment…ever. Once you get the gist, it allows for the seamless transfer of liquids between fermenting vessels and, eventually, to the bottling bucket.

After eight days in primary fermentation, when the bubbling in the airlock had died down, I sampled the product. The result was unexpectedly excellent; this experiment was already starting to look promising. Eventually I bottled this first batch (others would follow) on Halloween 2015, and left the bottles to evolve further in our root cellar.

Just before Thanksgiving, I cracked open the first bottle with Tom, at Barley, Hops and Grapes, the first real test. He marveled at the clarity of the cider, and we both liked the pretty apple aromas, the citrusy note on the palate and the crisp acidity. He deemed it impressive, and suggested that I enter it into the Hudson Valley Homebrewers Competition in March. The seed had been planted.

Over the holidays, I shared the cider with friends and family (along with another, similar cider I had produced with an ale yeast in the interim), and gave some as gifts, too. Universally, the feedback was positive, with a majority favoring the first batch. Inspired by the beverage, my brother actually came up with a catchy name: “Matthews’ Empire”. It stuck.

Based on this encouraging roll-out, I decided to go to the Big Leagues — to Wassail, a cider bar/restaurant on Manhattan’s Lower East Side, where cider sommelier Daniel Pucci holds forth. At Daniel’s disposal for the lively, cider-enthused crowd downtown are 12 cider taps, a long cider list by-the-bottle (with many rare and hard-to-find bottlings) and an open-door policy for homebrewers to bring in and sample their craft.

The cider taps at Wassail

On a chilly January evening, I visited Daniel at Wassail with a couple of friends, bringing along the two ciders, C.Y. (cider yeast) and A.Y. (ale yeast) for his evaluation. While he liked both, he enthused about the C.Y., (again) for its clarity, especially for an unfined, home-brewed cider; for its clean, crisp palate; and for its pretty apple character. He called it a professional effort, one of the better home-brewed ciders he had ever tasted (and he’s tried a few!). 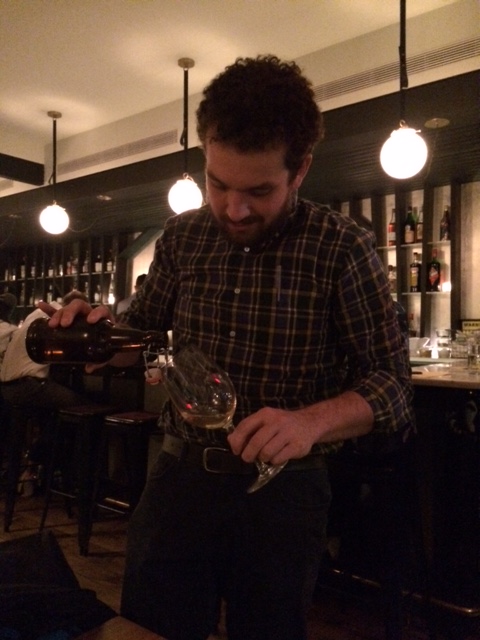 Buoyed by the praise from Manhattan’s cider guru, I had no choice but to enter the Hudson Valley competition; I signed up both C.Y. and A.Y. via Barley, Hops and Grapes, with the gut feeling that if anything showed in the contest, it would be the C.Y.. The competition rules require two bottles per entry, so my very last two bottles of C.Y. went for the contest. Tom cautioned that the judges were tough, and wished me luck.

The 26th Annual Hudson Valley Homebrewers Competition took place on Saturday, March 12, 2016, with 326 total entries, and 28 ciders spanning two different categories. On Sunday morning the next day, I duly checked for the results online. To my shock — and delight — I immediately saw at the top of the webpage that Matthews’ Empire C.Y. came in as Best of Show – Cider, and First Place — Standard Cider! What a pay-off!

In addition to the blue ribbon and a gift certificate to a homebrewing shop, I (and the other participants) also received the judges’ tasting notes on entries in the competition. They certainly pulled no punches. But the overall impression recorded by one of the judges about Matthews’ Empire C.Y summed up my effort and aspiration nicely: “A pleasant drink”.

Now the bar has been set extremely high for future efforts. Still, I’ve learned a tremendous amount, and have a number of cider-related ideas percolating…