Posted on August 3, 2016 by upstatedowntown

With its tradition of apple-producing excellence — and aided by the New York Farm Cidery license option — the Hudson Valley (HV) has become an epicenter of the burgeoning (hard) craft cider scene, supported by the Hudson Valley Cider Alliance.

And as a cider enthusiast (and maker!), I keep tabs on what is appearing in the local HV cider market place. In recent months, I’ve noticed a positive trendlet from the region’s craft producers: offerings of dry-hopped cider. 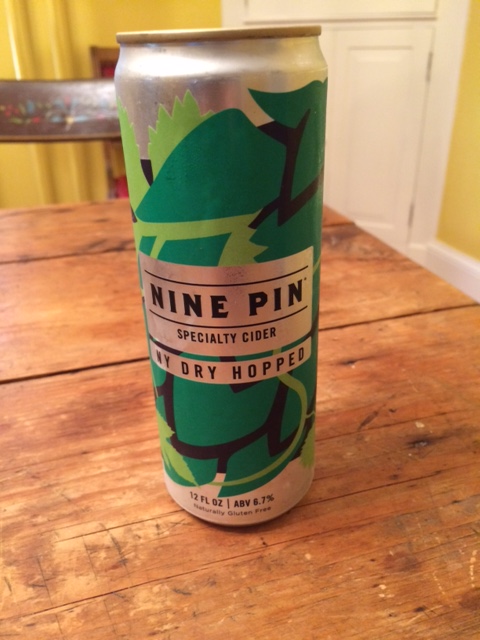 Hops, the flowers (strobiles) of the perennial hop plant, are inextricably linked with beer, and have been for over a millennium. They impart various floral and citric flavors, including a balancing bitterness to the sweetness of the malt, as well as serving as a stability agent and preservative, with antimicrobial qualities. “Dry hopping”, both in beer and cider , is accomplished by adding the hops only once the respective beverages are ready for bottling, with no heating involved (which would impart a signature bitterness and other chemical reactions, often desirable in beers). Hence, it’s a last stage infusion, adding only hop flavors and aromas. Length of soaking time and choice of hops determine the flavor profile.

Hops in cider is certainly not traditional. In fact, the combination came out of the Pacific Northwest, which is a both major production zone for apples (and, therefore, cider) and for hops (for the domestic beer industry). Given the longstanding craft beer movement out West, and its penchant for improvisation, the hop/cider thing cropped up organically, notably via Oregon’s Wandering Aengus Ciderworks.

While non-traditional, dry-hopped cider makes sense, on two levels. First, good ciders often sport citric flavors and floral aromas, which hops can nicely compliment and enhance when used judiciously, ideally without masking the apple character. Second, given the huge number of craft beer drinkers and “hop heads” out there, a hops-imbued cider offers some familiar flavors, serving as a potential cross-over beverage. The key is matching the flavors and aromas of the base cider with the right hops. Generally, the floral, fruity hops used in IPAs, like Cascade, Galaxy, Citra and Centennial, are the favored choices for dry-hopped ciders.

In the mid-19th century, central New York was the undisputed leader in US hops production. Prohibition, along with some persistent crop diseases, eventually killed off the New York hops sector, however; things moved out West, to Washington State, Oregon and Idaho, where ideal conditions exist for growing hops. It’s a major reason why the microbrew craze started in the Pacific Northwest back in the 1980s — that’s where the hops were.

But courtesy the craft beer juggernaut, which in the last decade has blossomed in the Northeast, including NY State, sourcing of local ingredients for brewing has become a thing, and within that trend, hops production has found its way back to the Empire State, albeit on a small (but growing) scale, with encouragement from the Cornell Extension folks.

I had my first taste of Naked Flock’s Citra-Hopped Cider on draft at Daughter’s Fare and Ale in Red Hook a few months back (which, in addition to great sandwiches and other eats, has six taps featuring local brews, one of which often devoted to cider). As the name suggests, Citra hops bring assertive citrus elements — lemon, lime and grapefruit — and these flavors dominate, in a positive way, the bright, effervescent Naked Flock cider, which finishes with a pleasant, off-dry (and slight) bitterness. Extremely sessionable, this one is for hops lovers. 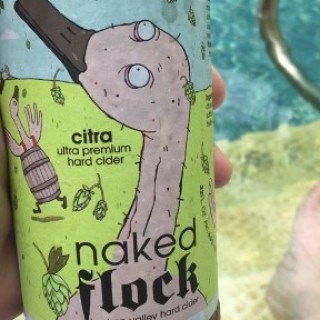 I have written about Nine Pin Ciderworks for Edible Hudson Valley, in particular its experimental cider program featured on taps in its Albany, NY tasting room. Successful experiments (based on consumer feedback) can lead to larger scale production and/or special releases of certain Nine Pin ciders. And clearly they’ve played successfully with dry-hopped ciders, culminating in a Limited Reserve (in can) of the Nine Pin NY Dry Hopped Cider (see image up top). Made with 100% NY hops (and apples!), the Nine Pine version has found a home in my fridge this summer. Floral and citrusy on the nose, but with clean, crisp apple character still apparent in palate (along with citric notes), this is an amazingly quaffable beverage, and a great beer substitute (as I am gluten sensitive, and sadly off the suds!).

Another HV dry-hopped cider is from Doc’s Draft Hard Ciders, made in Warwick, NY, an excellent local cider producer that is relatively widely distributed. Dry-hopped with Centennial and Chinook hops, Doc’s version is less overt and more nuanced in terms of hoppiness compared with the two above, balancing floral notes and a slight bitterness with the off-dry, slightly sweet character of the base cider — a pleasing result. 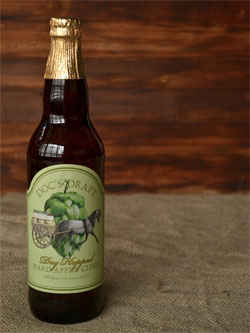 Finally, Bad Seed in Highland, NY produces an India Pale Cider (IPC), which is made in the hoppy style of an India Pale Ale, using Cascade hops. This is definitely on my list to try. And I’m happy to hear about other examples. too.

The bottom line here: dry-hopped cider is a worthy, highly drinkable, if out-of-the box style, and HV versions are showing well. Do not fear the hops!