Posted on September 11, 2019 by upstatedowntown

On a beautiful early September day at the Dutchess County Fairgounds this past Saturday, the  Hudson Valley Wine & Spirits Competition (HVWSC) once again took place. As usual, some results were expected, some were surprising, but overall, the judging experience this year pointed to continued improvement in the Hudson River Region’s (HRR) quality of wine-making.

Not for the first time (as in 2015 and 2017), there was a tie for the coveted Winery of the Year award, which went to Fjord Vineyards (a previous winner) and, for the first time, Hudson-Chatham Winery.  Both made impressive showings. Fjord took the Best Hudson Valley Wine (made with HV fruit) for its 2018 Rosé of Cab Franc (as well as Best Rosé); Hudson-Chatham showed its world class facility with both French-American hybrids (e.g. a Gold medal for its Estate Chelois), and vinifera-based wines (e.g. a Gold medal for its Pinot Noir, which came out of my panel).

A special shout-out goes to Hudson-Chatham’s dynamic owner/winemaker, Carlo DeVito, and his long-time winemaker, Stephen Casscles (who authored the book “Grapes of the Hudson Valley”). Often a bridesmaid for this award in past competitions, DeVito and Hudson-Chatham have been leading lights in the region’s push towards quality improvement, and for using a diverse palette of grape varieties, both vinifera and hybrids, including arguably the world’s best wines made from Baco Noir. Well done, Carlo!

From my judging panel came the Best White (and runner-up to the Best HV Wine), Millbrook’s 2017 Castle Hill Vineyard Chardonnay, a text book (and delicious!) example of  judicious use of oak in winemaking, particularly with regard to Chardonnay. In fact, our Chardonnay flight was quite impressive, also yielding a Double Gold for Benmarl’s 2018 Stainless Steel Chardonnay, which was a totally different style from Millbrook’s — sans oak,  with zesty gala apple and guava fruit notes. Impressive.

The other clear winner in this year’s proceedings: the Cabernet Franc grape, which is widely considered the HRR’s best red vinifera performer, and continues to win accolades. In fact, at eight of the last 10 HVWSCs, a Cab Franc-based wine has won Best Red.  At a special HV Cab Franc tasting put on by the Hudson Valley Cab Franc Coalition this past May, I predicted there would be some Gold medals winners out of the bunch. Sure enough, in addition to Fjord’s Rosé of Cab Franc double winner, the Best Red and Best in Show went to Glorie Farm Winery’s 2015 Cabernet Franc. 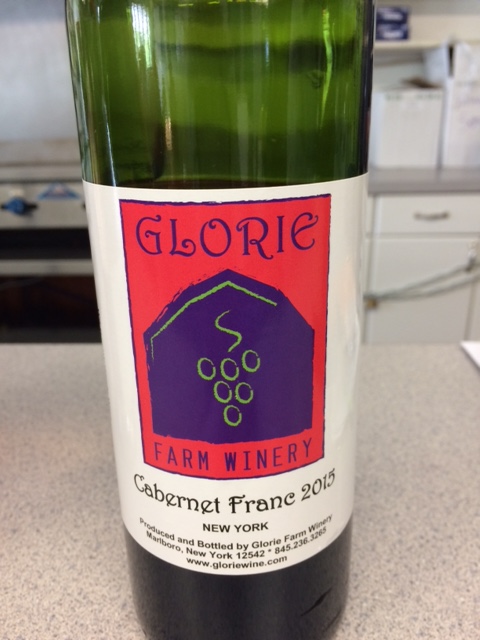 Best Red and Best in Show

On the spirits side, my panel had the Gin flight, from which came a Double Gold winner — Stoutridge Gin 0 — a floral and balanced world-class effort. This went on to tie with…the  Stoutridge Rye “75” for Best Spirit.  Not a bad day’s work for Stoutridge…

All in all, it was an excellent competition — thanks again to Debbie Gioquindo and crew! — and a good showing for the Hudson River Region.

The other “Best” awards were: