Posted on November 20, 2011 by upstatedowntown

It’s November, and deer season is upon us… And in Dutchess County, NY, where the white-tailed deer population has expanded to ridiculous heights, it’s hard to say who is hunting whom this time of year… 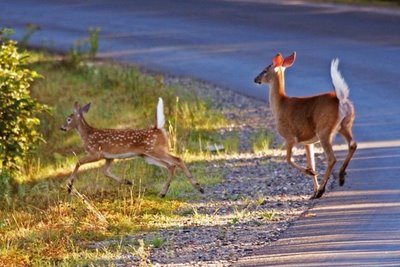 The roadside carnage we witness around our domicile upstate shows that outside of hunters (we need more of them, please), cars are the only real, if accidental, deer predators. But with an average property damage price ticket of $3,171 per deer collision, according to State Farm Insurance’s annual report on deer-vehicle collisions, this is an expensive — and dangerous — form of population control.  Far from cute, Bambi and his emboldened brood are out of hand, be it on the road, in gardens or in sensitive woodland habitat.

November, the apex of the deer mating and migration season, is the month when cars and deer are most likely to clash — more than 18% of such accidents happen in November, says State Farm, followed by October and December.

There is good news. For the third consecutive year, the estimated number of deer-vehicle collisions in the U.S. has dropped. And the downturn is apparently accelerating. But the anecdotal evidence from our neck of the woods does not playback this positive trend. And as a three-time collider (in the last eight years), I find it difficult to believe, almost insulting, that New York State ranks 21st in terms of likelihood of a collision with deer within the next year, at 1 in 157. No doubt in my mind that Dutchess County by itself would rank near the top, along with #1 West Virginia (1/52.8), Iowa (1/77.2) and South Dakota (1/81.2). Of course, in raw numbers of accidents, New York State ranks 3rd (72,307), behind only Pennsylvania (101,299) and Michigan (78,304), but New York also has lots more registered drivers, which takes down the likelihood numbers.

To reduce the odds of a costly deer encounter — year-round — State Farm offers some practical tips:

This entry was posted in At Our Farmhouse, Hudson Valley and tagged deer-vehicle collisions; State Farm Insurance, White-tailed deer. Bookmark the permalink.