Normally, the Wine Media Guild of New York’s annual Bordeaux lunch takes place in January, when the Union de Grand Crus de Bordeaux’s (UGCB) show comes through town as part of a national tour. But January’s unpredictable weather — and the harried schedules of producers during the UGCB campaign — led to a postponement from January 2018 to this past Tuesday, a beautiful, sunny day in May in Manhattan.

It was worth the wait.

With thanks to WMG co-chairs Pat Savoie and Charles Scicolone for organizing, our exceptional Grand Cru “ensemble” was composed of  Château Beychevelle (Saint-Julien), Château Guiraud (Sauternes), Château Latour Martillac (Pessac-Léognan) and Château Kirwan (Margaux). Each house brought a range of wines from outstanding vintages (from 1998/2000, to 2015)  for the walk-around, and some older vintages showed up at the lunch, all of which took place at Il Gattopardo.

This focused, manageable tasting/lunch illustrated top-flight Bordeaux’s enduring value: a benchmark for age worthy wines of complexity and finesse, stimulating both to the palate and the intellect, and versatile at the table.

Grand Crus all, the producers represented are technically “Left Bank”, i.e. located on the west banks of the Gironde estuary and Garonne river, but they offered a nice cross-section of Bordeaux terroirs and styles, in an arc running from north (Saint-Julien) to south (Sauternes). 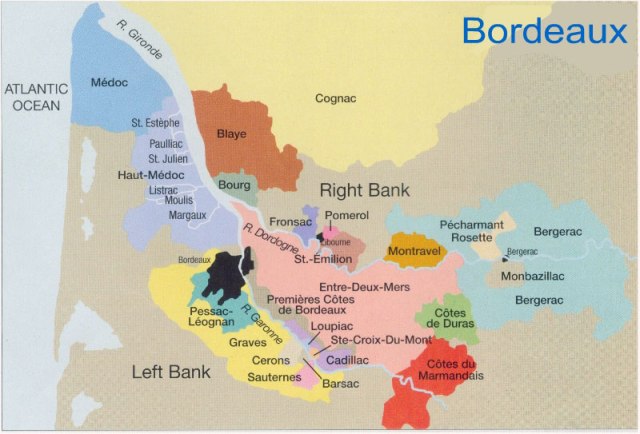 I recently lauded the outstanding 2015 vintage in Bordeaux, the one millésime that each house brought to the WMG tasting. And these 2015s completely validated the high esteem showered on the overall vintage — all were wines of outstanding balance, structure, fruit and energy. I was particularly taken with Chateau Latour Martillac’s (CLM) 2015 (red), with its pretty red fruit and floral nose, balanced briar fruit and minerality on the palate and a long, supple finish (54% Cabernet Sauvignon, 40% Merlot and 6% Petit Verdot).

Based in Pessac-Leognan, one of Bordeaux’s most fashionable districts (and a stone’s throw from the City of Bordeaux), CLM makes a stylish case for the appellation, from its vibrant dry whites and reds, to its singular art deco label.

Inspiration for the Latour Martillac label: a 1930s winemaker’s notebook!

Dry whites from Pessac and Graves are some of Bordeaux’s best price/quality values, so I was glad that CLM also brought several vintages (2011, 2013 and 2015) of its Sauvignon Blanc-Semillon blends to the tasting. Like its red counterpart, the 2015 CLM blanc mirrors the overall excellence of the vintage. But I was really struck by the 2013, an aromatic beauty full of Sauvignon Blanc (SB) character and mineral notes, and a round, clean palate with tangy citrus elements, finishing long and stony (70% SB, 30% Semillon)

Another year that shone across the board was 2009, one of the warmer vintages of the recent past, and a blockbuster in its own right. Three of the four wineries — Beychevelle, Kirwan and Guiraud — presented 2009s, and all were outstanding — opulent, hedonistic wines, but with balance and focus, and drinking exceedingly well. Kirwan’s Sophie Schÿler Thierry joked that 2009 was her “California vintage”, which most people guess is 100% Merlot due to its generosity and lush black fruit, but is actually only composed of 18% Merlot (the majority being Cabernet Sauvignon)! “Never assume grape varieties in Bordeaux,” she laughingly remarked.

Kirwan’s 2010 — and 2010 was also an excellent year across Bordeaux — was a study in contrast. Classically Margaux, it featured focused berry fruit and scents of earth and spice, together with elegant structure and great balance (50 Cabernet Sauvignon, 35% Merlot, 9% Cabernet Franc, 6% Petit Verdot). This one will continue to age nicely.

Chateau Beychevelle has long been a constant of quality and consistency in my book, led by the stalwart presence of Philippe Blanc on the international scene (and one of the Medoc’s most beautiful properties, with a great view of the Gironde estuary). Predictably, the wines (2000, 2005, 2009, 2015 2015) all showed well. In addition to the aforementioned 2009, I found the 2005 Beychevelle especially compelling, sporting smoky Cassis and black fruit and a lush, silky palate; a seamless beauty, and ready to drink (47% Cabernet Sauvignon, 46% Merlot, 3% Cab Franc, 4% Petit Verdot). Over lunch, a WMG member shared a 1996 Beychevelle , an aromatic cedar box, with vibrant, earthy black fruit, drinking beautifully, and a great indication of where the younger vintages will head.

Sauternes, Bordeaux’s iconic, botrytis-influenced sweet wine appellation, was well-represented by Chateau Guiraud, a historic property, and the first Bordeaux Chateau of the famous 1855 Classification to be awarded an Organic Agriculture certificate (in 2011), and long before that sans chemical sprays and pesticides. Somewhat unexpectedly, Guiraud had its dry white, G de Guiraud sec 2015, on offer, a zesty, highly drinkable 50-50 blend of SB and Semillon. It also featured a second wine, the Petit Guiraud 2015, which is significantly less sweet than the Chateau’s first wine, and marketed (rightly) as an aperitif wine. But make no mistake: the “stickies” were the stars, and the 1998, a big, classic knockout, laced with candied tropical fruit and caramel — and vibrant, refreshing acidity — was the headliner.

All in all, a quality, informative and “harmonious” WMG event, made possible by this exceptional Bordeaux Grand Cru “quartet”. 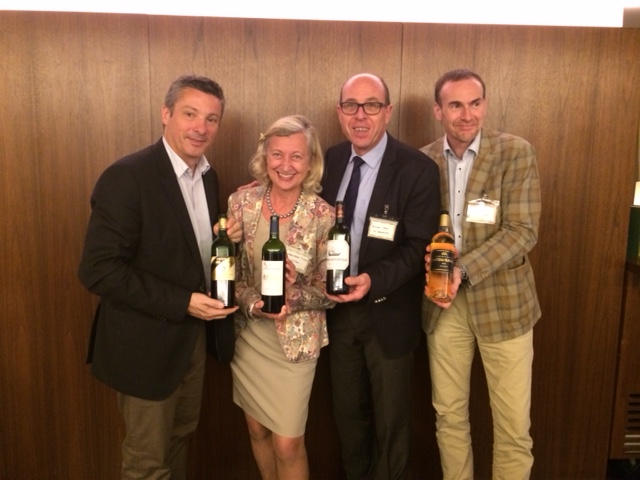