Gaskins’ Got It Going On

In the micro-hamlet of Germantown, in southern Columbia County (NY), Gaskins is a pulsing farm-to-table boîte in the middle of a small, but vibrant, business district.  As its second anniversary approaches, this “tavern” has clearly hit its stride, a welcome harbor for locals, and a culinary destination in its own right. 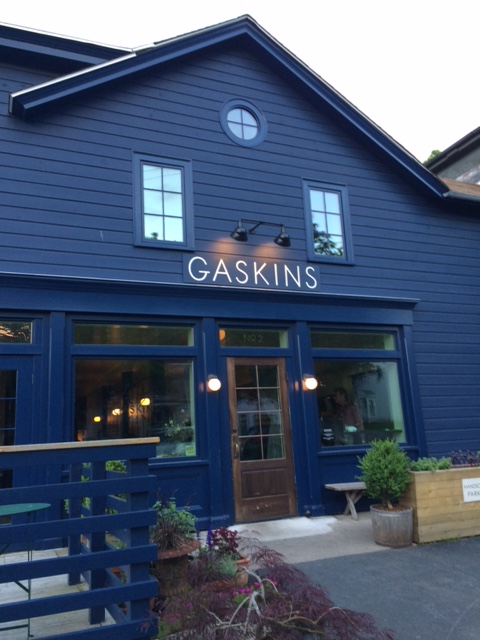 My first impression two years ago was less than favorable.

After hearing friends rave about Gaskins when it first opened,  Kathryn and I made the fifteen-minute drive north to Germantown for dinner late one summer evening. Service was winding down, but the kitchen was still open. We sat in the stylish, retro main dining room which, despite not being crowded, was a cacophonous echo chamber, a pet peeve of ours when dining out. Perhaps it had been a long evening, but the service was also indifferent and slow. And the consciously compressed, locavore-driven menu didn’t really inspire us on the occasion. Fried chicken was on offer, and I, being from the South (and from a long line of excellent southern cooks!), decided that would be a good test for the kitchen. It failed: the chicken was a bready, greasy mess. So, we were underwhelmed, and first impressions are difficult to overcome.

In the interim, Gaskins would often come up in local conversation, with most people surprised by our initial negative experience. Finally, when I was up early from the City for a long weekend late this winter, I resolved to give it another try. I was not disappointed (and I’ve gone back several times).

While the main room is still acoustically challenging, it does have good energy (and is always full). But the real revelation: eating at the bar. Separated from the dining room by a long parallel partition, and with a handsome Carrera marble top, the bar is a relatively quiet niche where conversation can take place – best seats in the house!

It’s also a good perch from which to experience a big part of Gaskins’ success – the excellent beverage program. From the six local and regional taps — five of beer (e.g. Suarez Family Brewery [NY], Rushing Duck [NY] and Hill Farmstead [VT]), and one dedicated to the burgeoning local cider scene – to the nicely selected/edited cocktail and wine list (with mainly esoteric, food-friendly French selections), nobody is going thirsty here. The knowledgeable and friendly bar staff add to the positive vibe.

The menu, which changes frequently, reflects the season and leverages the exceptional local bounty, offers plenty of nourishing choices – around seven to eight starters and entrees, respectively. Portions are fair and reasonably priced, and you don’t have to strain to find greens or veggies. In fact, “The Big Salad” ($8) of fresh mixed greens, radishes and a green goddess dressing presents more vegetable servings in one go than some people get in a week! And the roasted beets with crème fraiche, pistachios and sorrel ($11) is a textural and sweet/savory delight.

The cooking is simply spot on. For example, the wood-roasted squid with roasted fingerling potatoes, romesco sauce and arugula ($22) is a nicely smoky and satisfying combination of flavors and textures, where the whole effect is clearly greater than the sum of the parts, bound together by the tangy romesco. 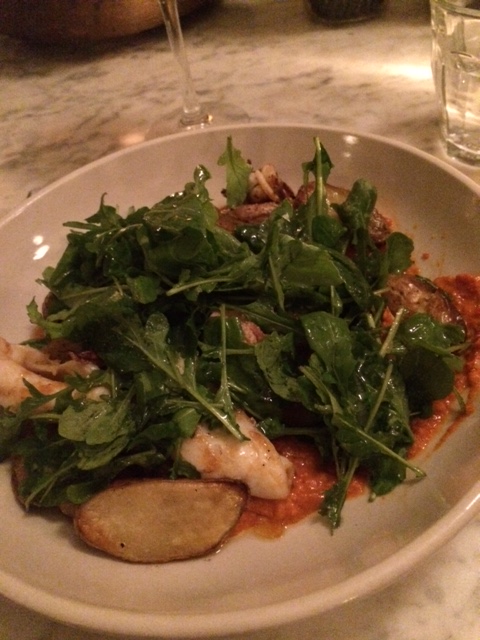 Many restaurants would shy away from something like bluefish, due to its famously oily nature and strong flavor, but Gaskins uses it to delicious advantage in its crispy, pan-roasted version, dressing it with a spicy yoghurt sauce, along with roasted asparagus  and fresh chicory($25). It paired beautifully with a glass of the 2016 Lapierre “Raisins Gaulois” Beaujolais ($11). 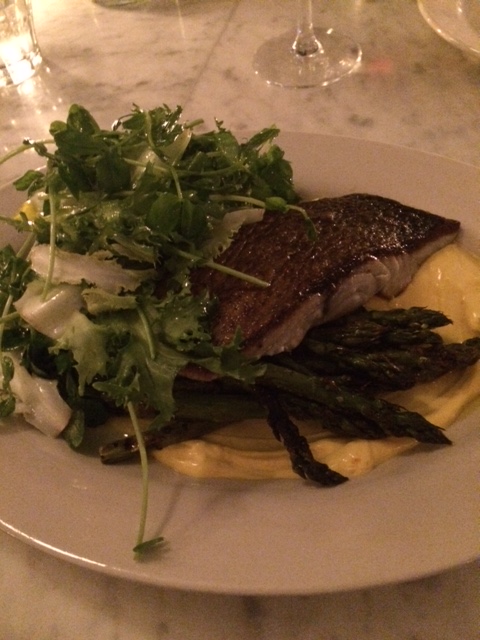 While Gaskins is off the beaten path, it has been fully discovered; reservations are necessary, especially during the busy summer season.

It is unquestionably worth the trip.