Posted on November 11, 2015 by upstatedowntown

Tuscan wines, like Chianti (in its many iterations), the esteemed Brunello di Montalcino and the “Super Tuscans” (such as Sassicaia and Antinori’s Tignanello), are well-known on these shores, at least among cognoscenti.

Less familiar, but sources of distinct value, are some of the Sangiovese-based wines of the Maremma, Tuscany’s southern coastal area along the Tyrrhenian Sea. This includes the municipalities of Scansano, as well as parts of Grosseto and Magliano. Within this region, two Denominazione stand out, Morellino di Scansano DOCG and Montecucco DOCG, a relatively new appellation which is practically unheard of here, but is producing some compelling wines.

Location of the Maremma

For the first time ever, the producer consortia of these two adjacent Maremma wine districts recently conducted a joint tour of the US, showcasing their wares to the wine trade and media. On the New York City leg of this trip, over a dinner at Aroma Café and Winebar in the East Village, I had the opportunity to taste some wines from the region.

Across the board, the quality of these expressive, aromatic wines was stunningly good, especially in light of the $17 to $20 retail price point for most of the wines represented.

“Morellino” is the local name for Sangiovese. And close proximity to the sea in Scansano means cooling winds during the hot summer days — and significant day-night temperature differentials in the coastal hills – lending freshness and acidity to the Morellino wines. Heterogeneous soils, including volcanic elements – Mt. Amiata, Italy’s second tallest volcano (inactive) is on the Maremma’s eastern edge — makes for a diverse winemaker’s palette. And the Morellino version of Sangiovese (minimum 85% of the wine) sports pronounced aromatics, redolent of dried herbs, flowers and black cherry/wild berry character (which plays back on the palate.) There are three basic styles: one is a fresh, young wine with no time in wood, that can be released in the spring after harvest (very Beaujolais-like – in a good way); a Riserva, which can be only released at the earliest on January 1, two years after the harvest, and after at least one year in wood, making for a brawnier, spicier wine; and finally, an attractive, in-between style, aged 4 to 12 months, some of it usually in wood.

A great example of the “fresh” Morellino style is the Fattoria Mantellassi Mentore 2014, with its pronounced mineral and violet nose and energetic, dark cherry palate, reminiscent of a Cru Beaujolais. From the local cooperative, Vignaioli Morellino di Scansano, the Vigna Benefizio 2014, is an attractive in-between style, featuring a clean, fresh dark berry nose and palate, medium body and tannin and good length, on slightly tarry and licorice finish. Although not quite a Riserva (but drinking like one) is the Conte Ferdinando Guicciardini Massi di Mandorlaia I Massi 2013: an intense ruby color, it has notes of spice and minerals, with deep, black cherry fruit and vibrant acidity, finishing long and elegant, beautifully balanced – a wine of both power and finesse.

Just to the north of Morellino di Scansano, more inland and at higher altitude, is Montecucco. Founded only in 1998, but blessed geographically, geologically and climatically, it has come very long way in a short amount of time, attracting top winemaking talent with a predilection for organic and biodynamic viticulture. 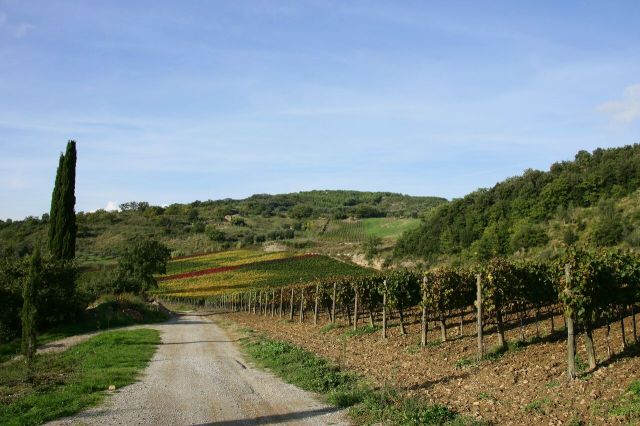 The Montecucco wines showed extremely well. A white wine based on Vermentino is part of the appellation, and the version I tasted, the Ribusieri Chiaranotte Vermentino 2014 (100% Vermentino), is a stellar example. A complex nose of almonds, earth and ripe orchard fruit precedes pretty pear and gala apple on the  palate, finishing with a pleasingly (slightly) bitter and a bone-dry mineral finish, a testament to the vineyard’s volcanic soils.

Moving on to reds (which predominate), the Campinuovi Montecucco Sangiovese DOCG 2013 was a knockout: a heady nose of high tone herbal laser beams and wild blueberry notes, followed by generous blueberry/dark cherry fruit in the mouth, with medium body and tannin, firm structure and great length. Impressive.

Finally, among the many standouts in this Maremma tasting, a clear highlight was the Basile Ad Agio Montecucco Sangiovese Riserva DOCG 2011. Like many in the DOCG, Basile is a certified organic producer, and its Riserva is held back for four years (in wood and in bottle) before release. It is worth the wait. Intense and focused, full of layered, high tone herbal/floral aromas and dark fruit flavors that slowly reveal themselves on a taut, perfectly balanced frame – elegance personified. It could easily be mistaken for a four-star Riserva from its neighbor across the Orcia river – Brunello di Montalcino — at a significantly lower cost.

Check back for more information on the availability of theses wines in the US/Northeast!