Posted on August 24, 2012 by upstatedowntown

Wild Horse Winery, a California Central Coast wine operation based in Templeton, CA (near Paso Robles), is best known for its Pinot Noirs…and its familiar galloping mustang image on its bottles.

Last week, I had the opportunity to dine with Wild Horse’s Director of Winemaking, Clay Brock, at Bottino in Chelsea, where we sampled  some of Wild Horse’s nationally available Pinots and Chardonnays.

Personable and unassuming, Brock grew up in the California wine business — his father worked as a vineyard manager in Napa. A Cal Poly graduate (in enology, go figure), he has been making wine since 1985, with stops at Byron Vineyards, Edna Valley Vineyards, Zaca Mesa (where he was VP of Winemaking) and, since 2008, Wild Horse, which he considers “the coolest job on the coast.” He knows the Central Coast like the back of his hand. 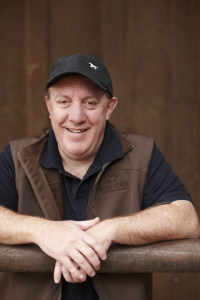 While the winery is based in Paso Robles, Brock sources fruit up and down the entire Central Coast region, one that stretches from south San Francisco to Santa Barbara County, covering some 4 million acres (and 30 sub-appellations). It gives him quite the palette to work from.

The first wine we tasted, the 2010 Central Coast Chardonnay, spoke volumes about Brock’s winemaking style. Clean and crisp, with tangy orchard fruit and a subtle note of toast and richness on the finish, it’s a complete, balanced effort that drinks much more expensively than its $15-17 price tag.  Brock is a firm believer in acidity — he considers it a crucial element in good wine, and believes it is often lacking in California’s many overripe Chardonnays. “When it comes to Chardonnay, I tend more to a Chablis style,” he said. This means harvesting the grapes before they become overly ripe, toning down the oak imprint on the wines, and letting the apple/pear fruit and minerality shine through. Made from mostly cool-climate Santa Barbara County fruit, it’s delicious, food-friendly and widely available.

Speaking of food-friendly, the 2010 Central Coast Pinot Noir — Wild Horse’s largest “workhorse” Pinot offering — sported pretty red briar fruit, vibrant acidity and some smoky spice notes. It melded beautifully with a dish of house-made cavatelli, heirloom tomatoes, ricotta and zucchini,  spiked with chili peppers.  At around $25, this is great Pinot for the price.

In fact, all the wines we sampled over dinner were well-made and highly drinkable, but the unquestionable show-stopper of the evening: the 2008 Cheval Sauvage Pinot Noir.

Meaning “Wild Horse” in French, the Cheval Sauvage is where California meets Burgundy. Made from small, select Pinot vineyards within the Santa Maria Valley and Santa Rita Hills AVAs in Santa Barbara County, the Cheval is about depth and energy, featuring  concentrated briar fruit and black cherry character, along with complex notes of earth and leather. Supple, vibrant and irresistible, finishing long and clean. it’s bottled brilliance.  And perfect with grilled lamb chops.

With a production of only 750 cases, the 2008 is just about gone from the market, unfortunately, but the Cheval Sauvage is an exceptional Cali Pinot to seek out at $65; I can’t wait to try the soon-to-be-released 2009.