Posted on December 12, 2011 by upstatedowntown

Taste memories can be powerful — and unexpected.

I experienced such a moment the other day, on a back-country walk near our house upstate, something I especially enjoy in the colder months, when the deer ticks are dormant, and the raptor-watching is spectacular. 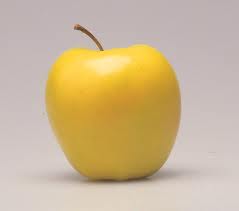 My route usually takes me through an orchard, adjacent to our property. Last weekend, on a seasonably chilly and bright December day, I was passing through rows of now barren, leafless apple trees when a single golden orb caught my eye. Drawn to it, I thought it might be rotten, but it was still firm, bright golden-yellow and without blemish—a tree-ripe Golden Delicious apple. Unable to resist, I took a bite. Its incredibly sweet, unmistakable flavor zapped me back to my grandmother Louise’s kitchen.

Louise, as we called her  — no “grandma” for her! — always had fruit out for me and my younger sister and brother on her kitchen table. This included, whenever available, her favorite: Golden Delicious apples. I certainly ate my fair share at her house, and developed an affinity for them. Of course, at that time, commercial apple choices in the supermarket had been winnowed down pretty much to Golden Delicious and the (unrelated) Red Delicious, but the Golden worked for me.

Discovered on a West Virginia farm in the 1890s, the Golden Delicious came from a single seedling tree, the possible (but unproven) offspring of a Grimes Golden and/or a Golden Reinette. Not only is the Golden Delicious sweet, flavorful and both good for eating and baking; it also grows easily, yields heavily and stores well, a trifecta for commercial production. These attributes came to the attention of the Stark Brothers Nursery early in the 20th century, which purchased the original tree (for grafting) and surrounding land, and proceeded to popularize the new, improved variety. Not only did it become a hugely important commercial apple and supermarket staple, but also an important breeding stock for new varieties, like the Jonagold, a Golden Delicious+Jonathan, and the Japanese Mutsu. Based on this runaway success, it was named West Virginia’s state fruit in 1955.

In a sense, it has become a victim of its own success. Like most commercially grown and delivered produce, the Golden is picked early, stored long and shipped great distances (i.e. from Washington state), which has a negative impact on flavor, and has given it a reputation as bland and boring. And with all the apple diversity available to us in the Hudson Valley, I can’t even remember the last time I had a Golden Delicious. Why eat a well-traveled commercial apple, when so many other varieties are locally available, even on our own property, endowed with three Empire apple trees?  That super-sweet taste of a Golden Delicious in the middle of the orchard showed how good it could be, opening a floodgate of memories.

Growing up, Louise and my grandfather, Sam, provided a happy refuge for me and my two siblings. As their first set of grand kids, we were the apple of their eyes, and the feeling was mutual. Living nearby, we spent a lot of time with them, a sane haven from my parents’ tumultuous relationship, which eventually ended in divorce. They actually sided with my mother, embarrassed by their son’s irresponsible ways, and always made themselves available to help us out when my mother had to work.

And there was always something for us to eat in Louise’s kitchen as we frequently passed in and out of their modest but tidy house, whether on the way back from football or baseball practice, after school, or on our way to play with the neighborhood kids.

Their door was always open and, more often than not, a Golden Delicious apple had my name on it.

This entry was posted in At Our Farmhouse, Food, Local Food and tagged Empire apple, Golden Delicious apple, taste memory. Bookmark the permalink.