Easy, healthy summertime eating is ripe for the picking at farmers’ markets right now.  A bright note in a still-floundering economy, farmers’ markets offer real value—both dollar-wise and nutritionally.  We value this farm-to-plate connection.  And with rising food and fuel costs, we don’t take farmers’ markets for granted. 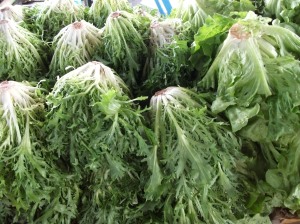 I’m addicted to leafy lettuce greens—especially romaine, red leaf and Bibb.  A large salad—typically greens, avocado and dried cranberries tossed with a hand-whisked balsamic-based vinaigrette —graces my plate every night.  Not because I’m desperately dieting….but simply because I crave greens.  I assume my body knows the nutrients it needs most.  As it turns out, my favorite lettuces are chockfull of vitamins C and K, calcium, fiber, folate and iron, as well as vitamin B6, magnesium and phosphorus. Accessible in dark leafy greens, vitamin K plays a role in helping blood clot properly and in bone health (higher levels of Vitamin K correlate with higher bone density).  Romaine and red leaf are also excellent sources of vitamin A.  In a study published last year by the British Medical Journal, researchers found that a diet high in leafy green vegetables can reduce Type 2 diabetes risk.  In an earlier 2004 study, published in Clinical Nutrition, rats fed a 20% lettuce diet had improved cholesterol metabolism—notably, a sharp decline in their liver cholesterol—and improved antioxidant status, suggesting that regular lettuce consumption may help protect against cardiovascular disease.  Several international studies have also linked frequent lettuce consumption with a lowered risk of breast cancer.

My obsession with quality lettuce is the reason that I never miss going to the Dag Hammarskjold Plaza Greenmarket on Wednesdays.  Just around the corner from the United Nations in Midtown, it attracts an international crowd, who descend upon the stands with near-religious fervor.  I go early—or risk losing the best pickings to aggressive European and Asian foragers.

In season, it’s a well-rounded medium-sized farmers’ market that covers all the bases: fruit, produce, meat, poultry, dairy and seafood.

Like a homing pigeon, I always rivet to S. & S. O. Produce Farms, a veritable sea of green: petite bundles of baby bok choy, fuzzy green beans, bunches of scallions, pretty tangles of garlic scapes, and fragrant bouquets of cilantro, parsley, mint, oregano and other seasonal herbs.  There are other vegetables, too: beets, onions, carrots, radishes, zucchini, yellow squash, but it’s the leafy greens, herbs and aromatics that draw me. 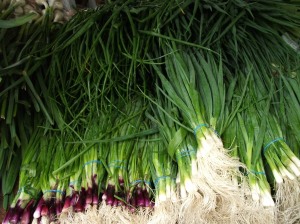 with clumps of black dirt still clinging to the bulb, they impart a spicy bite.  They’re a far cry from stingily apportioned store-bought scallions that are limp, pale and impotent flavorwise.  Like a shop-aholic gone mad, I always leave, laden with bulging bags of green loot.  But having spent under $20, it’s a rush I can afford to indulge.  And I have produce that lasts at least three days.

The other part of the produce equation is fruit, which, unfortunately, often gets a bad rap. Weight watchers tend to shun fruit as a “carbohydrate” or a “sugar” to be avoided (yet have no qualms about drinking diet soda ?!).  As with any food—even the good stuff—you have to mind your portions.  Eating raw, unprocessed fruits (not fruit juices) can help prevent obesity and reduce risk of coronary heart disease.  It’s a valuable source of antioxidants, vitamins, polyphenols and fiber, which helps cleanse the body of toxins and waste.

Naysayers can have their muffins, bagel and Slim Fast shakes.  For breakfast, I eat a fruit salad (about 1-1/2 to 2 cups fruit).  Every day. 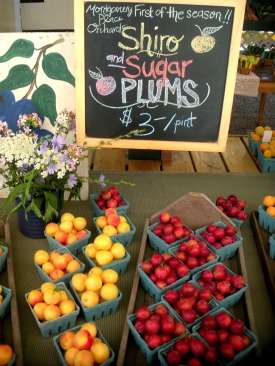 The Finckes are purists.  And field-to-stand freshness is what makes their produce so special.  Drool-worthy, in-season offerings include just-picked apricots, black raspberries, white peaches, antique apples, Asian pears, seedless grapes and heirloom tomatoes.  On display, too, are seasonal fruit jams that Talea makes at her home, or at the stand.  My husband and I are big fans of her jams—black currant is a favorite—a distillation of peak fruit flavor that’s not too sweet.

Montgomery Place Orchard farm stand is a magnet for chefs, too; some near, like Mike Gonnella of Tivoli Bread and Baking and Francesco Buitoni of Mercato in Red Hook; some further afield, like Serge Madikians of Serevan restaurant in Amenia or Food Network host Paula Deen who visited one fall.  And, if you like apples, come back in October when the stand holds its locally famous annual antique apple pie contest; more details here.

The beauty of local summertime produce?  It’s light.  It’s easy on the body’s digestive tract.  It promotes colon health.  And it’s the perfect antidote for the lazy or minimalist cook willing to let fresh, local flavor speak for itself.