As New York’s junior US Senator, Hillary Clinton was an effective advocate for New York State agriculture, including its growing wine industry. Every fall she would host a “New York Farm Day” reception in the Senate’s elegant Russell Caucus Room — one of DC’s most sought after tickets –featuring NY’s best farm products (prepared by top chefs) and award-winning wineries.

Even though Hillary’s job and responsibilities have certainly changed as US Secretary of State, it’s great to see that she’s still promoting New York products. The evidence? At a recent State Lunch for German Chancellor Dr. Angela Merkel, hosted by Clinton and Vice President Joe Biden, the wines served were those of Dr. Konstantin Frank’s Vinifera Wine Cellars, the iconic Finger Lakes winery (on Keuka Lake), whose revolutionary founder, Dr. Konstantin Frank, showed that European vinifera wine varieties, like Riesling and Chardonnay, could thrive in the eastern US.

Dr. Konstantin Frank’s has remained an innovative outfit, working with and pioneering different cool-climate vinifera grape varieties in the Finger Lakes. This was on display at the lunch in Dr. Merkel’s honor, who was in town to receive the Presidential Medal of Freedom from President Obama. The savvy wine list featured mainly Austro- 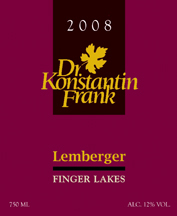 Germanic varietals: the 2010 Grüner Veltliner and the Dr. Frank Celebre Rose (Pinot Meunier) Sparkling Wine for the reception, and the 2010 Semi-Dry Riesling and the 2008 Lemberger (left, a.k.a. Blaufränkish), a peppery, medium-bodied red, with the luncheon.

Coincidence? I don’t think so. And I’m sure Dr. Merkel was flattered by the familiar grapes varieties, as well as by the quality of the NY wines.