I was at the James Beard Foundation Awards (JBFA, for short), a.k.a. the “Oscars of the food world”.  It’s always fallen on the same day as another annual event that I am obliged to attend.  But, this year, that other event was cancelled, and, by invitation, I found myself at Lincoln Center that evening.

If you’ve never been….the JBFA, now in its 21st year, is a big deal for food and beverage industry professionals, including chefs, restaurateurs, restaurant architects and designers, as well as cookbook authors and journalists.

Two themes dominated.  One: American cuisine as the “ultimate melting pot”.  And two: American “classics”—inspired, no doubt, by Coca Cola, a sponsor—highlighting restaurants, such as Watts Tea Shop in Milwaukee, Crook’s Corner in Chapel Hill and Noriega Restaurant in Bakersfield, as important mainstays in their respective communities.

The three co-hosts were all former James Beard Award winners: Ming Tsai of Blue Ginger in Wellesley, Massachusetts; Traci Des Jardin of Jardinère in San Francisco, perhaps, the most famous of her four California-based restaurants; and Tom Colicchio of Craft and Colicchio & Sons in New York City.

Tsai and Colicchio dished out choice advice for the soon-to-be-announced winners:

“Speak quickly.  About 2,000 foodies are waiting for dinner,” Tsai urged, only half joking.  (Thank you, Ming!  And, thankfully, most winners complied).

Colicchio advised:  “Have two speeches ready: one where you thank family members and everyone that you ever worked with. The other: ‘It was an honor to be nominated.’”

I was a bit taken aback when Marcus Samuelsson strode onto the stage in an all-white tux—accented by a skinny black tie—to present the “Rising Star Chef of the Year” award.  Not many men can get away with wearing all white without looking like the ice cream man.  Except, perhaps, Samuelsson, a chef with fashion charisma.  He still managed to look hot.  I’ll assume that his gorgeous model wife, Gate Maya Haile, approved that tux, too. 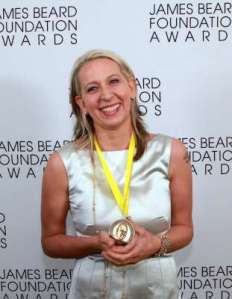 The crowd also roared when Gabrielle Hamilton of Prune (left) was announced as “Best Chef: New York City”.  Wearing a long, white, sleeveless satin dress, she was charmingly humble:  “I still identify with being a dishwasher—not a ‘chef’”.  About her win, Hamilton joked that all it took was “opening a can of sardines, a box of Triscuits and calling it a ‘signature dish’”.

Another score for New York City: Per Se won in the “Outstanding Service Award category, accepted by Thomas Keller and his team, one of whom read a (very) long list of thank you’s collected from the entire restaurant staff.

Surprised by his “Best Chef: Northwest” win, Andy Ricker of Pok Pok, a Portland-based restaurant that marries southeast Asian (predominantly Thai) home cooking, pub grub and street food on its menu, did not have a speech prepared.  Ricker proffered his thanks to the chefs of Northern Thailand “…because I didn’t make any of this shit up!”  He also praised Portland as being a unique city: “I don’t think that Pok Pok could not have happened the way it did anywhere else.”

Saipin Chutima of Lotus of Siam (Las Vegas) and Tyson Cole of Uchi + Uchiko (Austin) tied for “Best Chef Southwest”.  Through a translator, a smiling Saipin conveyed her appreciative thanks, and how she finally felt “like the bride, not the bridesmaid!”  Next up: Cole.  After a pregnant pause, he murmured: “A tie….interesting.” He then proceeded to thank his “lucky socks”, before musing about his longtime passion for sushi.

A touching reel gave a behind-the-scenes look at FareStart, a Seattle-based non-profit organization, whose mission is to provide culinary job skills for people who are homeless, or at risk for being homeless.  FareStart won the “Humanitarian of the Year” award, inspiring executive director Megan Karch’s enthusiastic acceptance speech: “It has always been our mission to empower the homeless and disadvantaged while creating nourishing and excellent food.”

You can always count on levity when Kevin Zraly, wine educator and founder of Windows on the World Wine School, takes the stage.  As a prelude to his acceptance speech for winning the “Lifetime Achievement Award”, Zraly shrugged off his jacket and did nine pushups.  OK?!  Zraly, who had lost over 70 friends and colleagues on 9/11, also took a serious moment to acknowledge his heartfelt thanks that “The Wicked Witch is DEAD”.  Zraly had audiences guessing once again when he began: “Jacques Pepin, Brad Pitt, Keith Richards and I have one thing in common…”  Long pause.  Whaaaat??  I couldn’t imagine.