Posted on January 10, 2011 by upstatedowntown

Triomphe at the Iroquois Hotel

On this bright, freezing cold Monday morning, I was at Triomphe in the Iroquois New York Hotel,  a luxury boutique hotel (across from the Royalton) on West 44th Street, for one reason only:

But I had a one-track mind.

I had dragged along my friend Michael, a former magazine editor and writer, and, frankly, a bit of a breakfast curmudgeon. “Can’t stomach breakfast before 11am.  Don’t be offended if I just have a poached egg,” he warned me.

Arriving at 10am, we had missed the power breakfast rush (7am-8:15am) and had the place virtually to ourselves.

It’s a lovely, intimate space. Designed by Ilan Waisbrod of Studio Gai in Chelsea, the room features a domed ceiling ringed by white moldings, walnut floors, oversized mirrors and a gentle backlit display of hand-blown glass above a sienna banquette.  It may also be one of the last restaurants in town using white tablecloths.  But I like that.  A lot.

All the better to enjoy the main event.

I ordered an espresso and the you-know-what.  Michael ditched his poached eggs for the truffled chicken salad sandwich (my second choice) instead.

We were surprised when our server (unobtrusive and obliging) placed an amuse-bouche before us: a dollop of ricotta garnished with pistachios and house-made prune jam.  Not necessary, but nice.

Zobel’s version of French toast, uses Challah, which is waffled, topped with poached pears, strawberries and blackberries, then crowned with a thin sliver of foie gras.  Dabs of chestnut jam (on the Challah) add another subtle dimension of sweetness.  It was the most delicate-tasting “French toast” I’ve ever had, a perfect balance of sweet and savory.  I ate it all.  It left me feeling happily satisfied, but not stuffed. 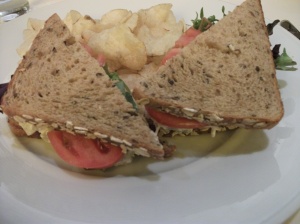 We’d gotten off to a very civilized start of the day.

One that makes breakfast—in the right place at the right time—a worthwhile outing.