Posted on June 6, 2019 by upstatedowntown

A view of Nostrano Vineyards’ property

Not only does Cab Franc grow well in the HV’s highly variable climate, but it’s also one of the most winter-hardy red vinifera varieties, able to withstand (normally) vine-killing temperatures of -10 F — a common occurrence in the HV’s often frigid winters. Another important factor is its versatility in the cellar, owing to its relatively lean tannins, medium body, and multi-layered fruit profile – berries, cherries, plums and cranberries – and excellence as a blender. Think cool-climate CF reds, like Chinon from France’s Loire Valley, with the possibility for bigger, more complex Cab Francs in stellar vintages. 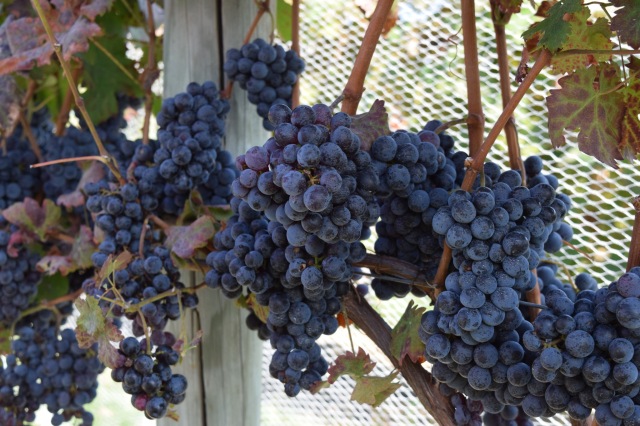 As a long-time observer of the local wine scene, I reside firmly in this Cab Franc camp. In fact, in an article I penned for Rural Intelligence nine years ago on the challenges of establishing a vineyard in the Hudson Valley (spoiler alert: it’s difficult!), I wrote the following: “For (vinifera) reds, late-ripening varieties like Cabernet Sauvignon are not well suited to this region, but its parent grape, Cabernet Franc, has exhibited consistent excellence, and gets my vote as the HV’s best all-around red vinifera grape.” While it is gratifying that my analysis was on target, it has been the skill and hard work of the HVCFC wineries in their local vineyards that have elevated CF to a “signature grape” for the Hudson River Region (HRR). And the ultimate proof is in the tasting:  over the last decade, a CF-based wine has garnered the Best Red accolade eight times at the annual Hudson Valley Wine & Spirits Competition (HVWSC). CF-based rosé has also shown well, and has great potential.

In the highly manageable and instructive May 30 tasting, Cab Franc excellence – and diversity – was in full evidence, across the eight wineries, with a lot of potential Gold medals in the mix. Some highlights follow.

Whitecliff, one of the flagship wineries of the HRR, has been working with the grape for over 20 years, and owner and founder Michael Migliore and his gang are excelling with it. His 2016 Estate Cabernet Franc has it all: balance, energy and pretty briar fruit, along with some forest floor aromatic notes. The 2017 barrel samples are also showing well, but none more so than the 2017 Cabernet Franc Olana Vineyard – yes, the Olana of famed 19th Century artist Frederic Church – a relatively new vineyard just below the historic house on the east bank of the Hudson River.  With an aromatic nose of plum and earth, this single vineyard wine already has amazing structure and length, particularly from such young vines.

Fjord featured a lively 2018 Rosé of Cabernet Franc, with an intense Sauvignon Blanc-like nose and citrusy palate; it will fly off the shelves this summer. And do seek out the 2017 Cabernet Franc, a silky wine with dark berry fruit and roasted coffee notes.

Some of Fjord’s Cab Franc offerings

Glorie Farm Winery owners Doug and MaryEllen Glorie are also founders of the HVCFC, and it’s easy to see why. True vignerons, they are passionate about agriculture in general, and viticulture in particular, and their compelling CF wines reflect this. The sprightly, nectarine-laced 2017 Rosé of Cabernet Franc is a highly drinkable winner. And two barrel samples from two specific vineyard sites showcased CF diversity and quality from the 2018 vintage: from “Block West” (from 20+ year-old vines), an earthy, mineral and dark berry wine that could easily be confused with a Loire Valley Chinon; from “Block East” (from five year-old vines), a fruit-forward (think red currant), energetic and peppery quaffer. Great blending elements!  But the 2014 Estate Cabernet Franc was the coup de grace, showing beautifully: a focused nose of high-tone herbal notes leads into a bright, energetic palate of briar fruit, finishing long and clean. Plenty left in the tank here.

Benmarl, the reigning Winery of the Year in the HV (and “America’s Oldest Vineyard”), had for many years a local parcel of Cab Franc, from which it made the 2012 Cabernet Franc. For me, this was the wine of the tasting: an intense, aromatic nose of menthol and tobacco leaf on a balanced, integrated frame, sporting energetic black fruit and soft tannins. Impressive, and aging beautifully. That local parcel, however, passed into Fjord Vineyards’ hands a number of years ago (there is Spaccarelli family connection), leaving Benmarl without HRR Cab Franc (and therefore outside the founding circle of the HVCFC). Until recently. A 2016 planting has come on stream, and the first wine from these local vines, the 2018 Cabernet Franc, was also on display at the tasting, already showing nice, lip-smacking briar fruit. Great potential!

All in all, a great tasting, and proof positive that Cab Franc has been a judicious choice to pursue for the Hudson Valley’s signature red vinifera grape.